I trust that all is occurring for my highest Good.

I trust in the universal energy of Love.

I willingly surrender to the higher will of my Soul.

I am always Safe. 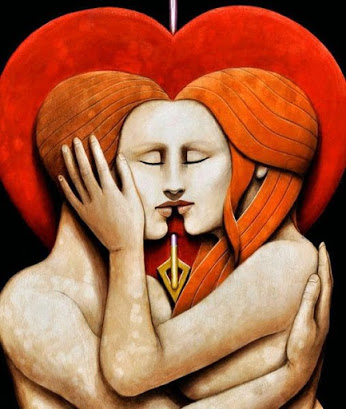 When you reach a certain level of consciousness or a higher frequency level in one life, your soul has to split into two in order to come back down into a physical body.

This means that there are essentially two of you roaming the earth. Both of you are in a way, half the energy that you originally were.

This other half of your energy is your Twin Flame, and when the two of you cross paths or meet it is like you instantly feel whole again.

So, where does that leave soul mates? Soul Mates are cut from the same cloth. Imagine a huge blanket of energy and your soul is cut out of that blanket. The other souls that come from the same blanket as you are soulmates and can be friends, family and lovers.

A Twin Flame however is when that single cut, or that single soul begins getting bigger and bigger to the point where it needs to be cut itself into two different energies. Think of Plato’s concept of Love from the Symposium.

Once these two Twin Flame energies finally merge again, no matter how many cycles of reincarnation it takes, the cloth gets bigger and eventually forms new souls.

Think of it like a seed, spreading and creating more flowers as it germinates.

This energetic split does not happen to everyone. It only happens to those who have reached a certain frequency or level of consciousness.

In each “twin” there is a magnet that sort of attracts the two of you together (like attracts like), and you can meet at any time, at any stage of your life journey.

When you come together, the relationship is very, very intense. This is because you are not only dealing with the “baggage” in your own mind and body but you also have to deal with your “baggage” in another body.

To get an idea of how intense the relationship would be, think about all the baggage that you have to deal with in your own mind and in the container of your own body. Well, imagine having two of those containers- it’s like there is double or even quadruple the “baggage” to sort through.

When you meet your Twin Flame, there is an instant feeling of “knowing” and connection. People might comment that you look alike or that you look “good together.” Often, the two of you will have very similar personalities and reflect the light and shadow sides of each other.

Sometimes you may not be able to recognize your Twin Flame because you have not been able to regain the same level of consciousness you acquired before you split into two.

Think of it this way- you live one lifetime understanding a higher frequency and higher vibration, but suddenly you loose half of this and come into physical form with half the energy or consciousness you once had.

This can manifest in your early childhood years as feeling out of place, like you don’t belong, frustrated about the world and highly inquisitive. You may even feel depressed or have an awakening early on. You may also have highly enlightened visions or thoughts at a young age, even if you were not exposed to it.

Being at a lower frequency or vibration and having to regain your “consciousness” is a challenge that you have to overcome this time around, and sometimes it can take multiple lifetimes in order to reach the stage that you were once at.

As soon as your Twin Flame is created, you enter Earth at the same time or within a few years of each other. The only exception to this would be if you have had to reincarnate multiple times in order to properly connect with each other.

If you have a Twin Flame you will meet in every lifetime, regardless of your level of consciousness. But, whether the two of you can make it work will depend on your frequency and essentially how much you have learnt to love yourself unconditionally.

Essentially it all comes back to self-love.